My name is Jonas Sjöberg and I live in Nol (30 kilometres north of Gothenburg). I bought a HYPRO 300 in the spring of 2007. I looked at the machines that were on the market, but since I do thinning/clearing in younger (thinner) growth, I considered that a stroke-fed machine would be too slow. So the high feeding rate and that the 300 was able to process trees down to 5 cm in diameter made ?the decision easier. Then also that the quality and finish of a HYPRO is at a high level didn’t make it harder.

The expectations I had with the 300 was that I would catch up on the clearing/thinning work that had to be done. What I saw in front of me was almost 40 hectares of clearing/thinning. A lot of the forest blew down in 1969, and then the previous owners lost interest in managing the forest. We bought the farm in 1999 and it took a number of years before I realised that I would only have the time to get fire wood for our own use, never mind catching up with all the clearing/thinning work. In the autumn of 2006, we decided to invest in a tractor processor to be able to catch up with the work. About 80% of the forest consists of Pine and 10% Spruce. The land consists of lakes, bogs, rocks and there were no roads.

I got the first impression of the machine when I was doing a course at the company in Lönsboda and I saw how well the machines were bolted together; this was very positive. Expectations were high on how the machine would work at home in my forest. I felt unaccustomed to using it in the first round and it took a few hours before the machine began to feel powerful, which certainly was because I had learned how to operate the machine.

Now when I have been using the machine for a number of years it has just "grown", it feels well-thought-out and it's just as fast as I expected it to be. By only using the chainsaw for felling and the HYPRO for "the rest" I'm then able to thin out lots / areas in a way that's not too far behind a big harvester. I'm still impressed by the speed, but one of the biggest advantages is that all the finished material is neatly stacked near the road where the tractor can access it for loading. I haven't seen the absence of a crane as a problem, since I usually still have to winch the trees over because of how the terrain looks like.

My view of HYPRO has only changed in a way that I understand that they really want to make a good product, and not just "pull off" something that’s half-completed. Although I have misjudged and overburdened the machine a few times, it has been able to take this without becoming damaged or stalling. I haven’t needed many spare parts, but the contacts I have had with HYPRO have always meant fast and factual response. I expect that I've done over 1500 m³ with the machine during the 5 years I've had it. Last season I changed one pulley on the winch, which is the only thing that has been damaged / worn during all those hours. Although the colour finish has scraped off in some places, it hasn’t begun to rust.

I can really recommend HYPRO for those who want a "finished" product and don't want to be repairing or rebuilding, in order to get the machine to work. Quality and functionality is really HYPRO's mantra! 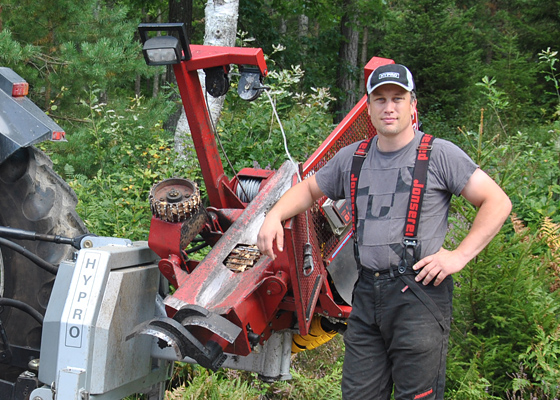